Myself and a couple of friends popped into Wall and Keogh on Camden Street last Sunday for coffee and sushi.  This cafe is an example of why one should never judge a book by its cover, or a shop by its exterior.  The innocuous grey exterior could easily be mistaken for a decorating store, but this is a foil for a great cafe/venue- Funky, shabby chic interior, stylish outdoor area and an events space downstairs.  Tons of exotic teas, fresh sushi, cakes and coffees are on offer.  I had the salmon sushi- freshly made to order and delicious ( tho i did miss not having pickled ginger) and two vanilla americanos because they were that good! My friends opted for herbal teas which were served in adorable tea pots.  Wall and Keogh is definitely worth a visit the next time your around the area.

http://www.facebook.com/WallandKeoghTea
Posted by HR Diva at 15:33 No comments:

Last Tuesday, myself and a few friends rocked up to the free speed dating event in the gutter bookshop as part of the 'make a date with Dublin' Valentines festival.
Thinking it would be a bit of craic on a Tuesday night.  Not so.  It seemed word hadn't spread to the male population of Dublin, with only 2 men turning up for  20 women.  We fled the scene before things got ugly, so im not sure if the night developed into a 'take me out' style competition or if the  men were shared out among the women equally, with everyone getting to take home a limb.

This had not been my first foray into the world of speed dating. I first gave speed dating a whirl last summer.  Myself and a friend of mine went along to a speed dating night in the Church last summer.
Talking to someone for 3 mins may not seem like a very long time, but in some cases it can be too long!
Over the course of the night, i met a guy who wasn't able to look me in the eye and kept looking at his watch, next was the man who spoke about himself for 3 minutes and didn't ask me a single question.  He may not have known my name, but i knew what his favourite walks around balbriggan.  Then there was the man who insulted my profession, followed by the snobby television producer, and last but not least, the clearly gay man who only went along to the event to steal tips for his rival dating company.

Tho answer the question: to speed date or not to speed date? i will say not.
Posted by HR Diva at 08:01 No comments:

How to host a Mad Men Dinner Party

When i signed up for 'come dine with me' competion with my friends, little did i know what i was in for!
After Brian and Jacqui set the standard with a fabulous murder mystery night, and Sinead and Clare followed up with an impressive Godfather themed night, Myself and Colin were very worried! What on earth were we going to do??

As a long time fan of the tv show Mad Men, and an even longer time lover of all things retro, i was eager to attempt a mad men style party.   Luckily, Colin was up for it too! So now we had our theme, how were we going to execute it?  Mad Men is all about vintage style, retro decor, booze and cigarrettes.  A good night in other words!

If you fancy hosting your own Mad Men style party, here are a few suggestions to get you started!

Decor:
Atmosphere is a large part of getting your mad men style party right.
The TV show is set in the 60's so move or hide any wires, computers, sound systems which wouldn't have been around in the 60's.
Mad Men is set in an advertising company so i printed off sample adverts from the show, got them blown up and laminated to hang on the walls.

Lighting is great- lots of fairy lights, tea lights etc...
Smoking is everywhere on the show so have lots of ashtrays in the room and give your guests a packet of  candy cigarrettes each.  Colin painstakingly glued 'lucky strike' labels onto a gazillion candy cigarrete packets.
Glassware- I picked up sherry glasses, a decantor and crystal from the charity shop and put them where the tv. would ordinarily stand.
The table- Red tablecloth, old records for placemats, napkins, cocktail glasses, wine glasses, retro name tags all add to the kitch factor 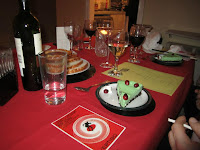 If you can, beg, borrow or steal a record player.  I had to make do with my not very retro laptop and it did look a bit odd amidst the old school surroundings. 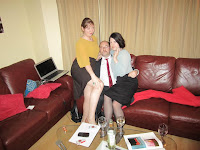 I borrowed the official soundtrack to the mad men series from the library. Music by nina simone, John coultrane or the rat pack would be appropriate.  Think jazz, no rap or hip-hop is allowed!

Dress to impress- no jeans allowed!

﻿﻿﻿ ﻿﻿﻿ As regular readers will know, this blog began in my hunt to find the dress of my dreams.  I got to wear my
dress for this themed party- hurrah :)
Jacqui brought a type-writer along, which provided lots of laughs!

﻿﻿﻿﻿﻿﻿﻿﻿﻿﻿﻿ ﻿﻿﻿﻿﻿﻿﻿﻿﻿﻿﻿
Menu:
The characters on the show don't seem to eat very much, but they do drink a lot!
In one episode, Betty does host a dinner party with a 'foods of the world' theme.
Therefore myself and colin decided to do a boozy menu with an international flavour.
The menu had to be a bit retro too, so no new fangled foods allowed!
Colin put together a gorgeous vintage style menu to tempt our guests upon arrival.
Starter:
Colin prepared a delicious tequila salsa salad, which was served on grilled tiger bread.
Many tomatos were killed in the making of this starter...
Mains:
The vegetarian guests (were there vegetarians in the 1960's?) tucked into a vegetarian bake
served with greens and crusty bread
﻿﻿﻿﻿﻿﻿﻿﻿﻿﻿ ﻿﻿﻿﻿﻿﻿﻿﻿﻿﻿
The carnivores tucked into boeuf bourgignon (boozy and french!) with potato gratin and greens
Dessert:
I made a scrumptious grasshopper pie for dessert.  Grasshopper pie is a lurid green boozy cheesecake pie with an oreo cookie base, and a creme de menthe/creme de cacao/ marshmallow topping.  Its based on the classic grasshopper cocktail which was popular in the 1950's
Drinks:
If you can try to stick to classic cocktails of the time- martini's, sidecars and manhattans would be perfect.
Myself and colin served simple vodka and cranberry cocktails on arrival and grasshopper's after dinner.
I served the grasshopper cocktails from a tea cup, maybe a kitch step to far....

Entertainment:
Myself and colin plumped for charades, which proved to be hilarious and very easy to organise.
Swing dancing could be another possible source of entertainment.  Basically any game which involves technology which would have been available in the 1960's would be suitable!
Myself and Colin had a ball organising our mad men party!  It took quite a lot of planning to pull off, but i think it was worth it!
Posted by HR Diva at 10:15 1 comment: