After 2 solid weeks of eating and drinking enough to feed a small country, library diva has decided to lead a healthier life.  Out goes the sweet treats and eating out, in comes the salad, the fruit and pilates bootcamp style!

Anyone who has ever thought that pilates is 'easy', 'slow' or 'girly' should try to do a pilates bootcamp.
30 minutes of high intensity cardio and core work on a saturday morning is no joke and definitely not for the hungover.  a mixture of squats, lunges, stretches, plank, core work and a nifty number which involves rolling like a ball from standing and rolling yourself back to the standing position.  Not my most elegant moment!
After the workout, i was hot, sweaty, thirsty but felt fantastic and healthier already.
It will probably take a few more weeks of frugal eating and exercise to make up for my overindulgence but at least i have made a start.

Email ThisBlogThis!Share to TwitterShare to FacebookShare to Pinterest
Labels Health and fitness

library diva gets her dress!

Avid readers may remember my preoccupation with a particular dress,  The dress.  A dress which became much more that cloth and stitching for me.  An obsession which consumed far too much time and energy than is really healthy.  Avid readers may also recall my disappointment when my correspondence with the dress designer halted abruptly.  After the rejection, i decided that maybe me and the dress were not meant to be.  There would be another dress for me, and there was.  A lovely long 1970's dress which i purchased at the vintage fair in Dunlaoghaire last month.  I comforted myself that maybe the bombshell dress wasn't as pretty as i thought it was, and besides it was far too expensive, costing 5 or 6 times more than my other dresses!
Last week the dress designer e-mailed me back.  She had my dress in stock, in my size and was ready to send it over.  I ignored the e-mail for a few days, I had another dress now, i didn't need her dress.  My 1970's dress was enough for me, or was it.
Last night i was on-line and bored, so on a whim i googled the dress.  It turns out my obsession, the bombshell dress is a bit of a phenomenon.  Apparently Nigella lawson bought 12 bombshell dresses in different colours last year, and sparked a 'fashion explosion'.  This fashion phenomenon completely passed me by at the time,but i had to admit Nigella looked awesome.  This got me thinking, maybe the dress was worth the price, after all, i am in my mid 20's now, nigella is 50.  If i can wear the dress at every possible occasion for the next 20-30 years it will have paid for itself! The ultimate in investment shopping.
So...to conclude, i  have decided to purchase the dress.  In hot pink.  Just like one of Nigellas.
If you want to read more about my dress (Yipee!) click on the link http://fashion.telegraph.co.uk/columns/hilary-alexander/TMG5940737/Nigella-Lawson-starts-a-fashion-explosion.html
http://www.vogue.co.uk/blogs/the-vogue-blog/articles/090703-the-bombshell-dress.aspx

Here is a picture of the lovely Nigella wearing my guna :) 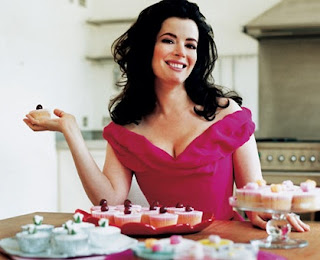 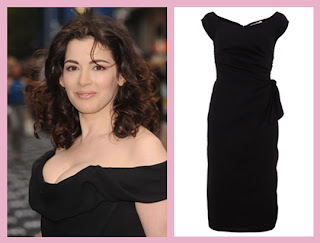 John Grant at the button factory

Hi,  my name is library diva and i am a phone-a-holic.  Without my phone, i am like a lost soul wandering around unsure of the time of day, what i am supposed to be doing at this precise moment, the phone number of someone who could enlighten me on what im supposed to be doing and the means of contacting said person. You see, for me a phone is much more than a receptical for  phone calls and text messages, it is my contact to the outside world.   It acts as clock, alarm clock, calendar, organiser, phone directory.  It is my life line.  How did people survive before the age of the mobile phone?  I don't know and frankly I don't want to know.

On Monday evening I left my phone at a friends house.  Cue one restless night spent tossing and turning, afraid to fall into asleep in case i forgot to wake up for work (it should, at this point, be noted that i start work at 1pm and therefore am highly unlikely to sleep through work). During the night i hatched a plan to get
up really early, leg it over to my friends house before she went to work, sidestepping any impending disasters.  Unfortunately I was too late.
Not dispirited, i formulated Plan B.  I would make it into work alive and on time, make contact with my friend and arrange to pick up my phone.  Simple, right? Wrong.  Unable to get my friends number, i decided that i would run over to her house after work and hope for the best.  Seven nightmare hours at work later, i got my phone back.  Then  i read the messages.

A pal of mine had scored tickets to a John Grant gig.  She was waiting for me in the button factory for the past half an hour.  Where the hell was i?  Dammit!!! I ran for the luas, ringing her to apologise profusely.  Twenty minutes later, i was at the gig.  Just in time to see the headline act.

After the traumatic day, I was just glad to have gotten to the venue in one piece, to see my pal and to be holding a large gin and tonic.  Then he sang.  I had never heard of John Grant before the gig, but he is class.  His deep voice is hypnotic.   As he was singing 'Where dreams go to die' i could feel my muscles unwinding. His piano playing skills are phenomenal as are his song writing skills.  Check out the song 'Sigourney Weaver'- hillarious yet beautiful.  The button factory was a great choice of venue, as it is small enough to allow interaction between the artist and the audience.  Audience members were able to request songs, and Grant's easy conversational style of performing is well suited to smaller venues.  At the end of the show he gave his argument against the use of encores.  He 'just wants to come out, sing all the songs he knows and go home'.  A brilliant gig, i didn't know who he was before the gig, and im delighted to have heard such a talented muscician.  A happy ending to a crappy day.

John Grant hails from Michigan.  He used to sing with the group the Czars.  His 2010 album 'Queen of Denmark' was voted the album of the year by Mojo magazine.  The album was also listed in the top 10 albums of 2010 by the guardian.  Songs to listen out for are 'Mars', 'Sigourney Weaver', 'Queen of Denmark' and 'Where dreams go to die'.  Check him out- he's awesome!
Posted by HR Diva at 15:10 No comments: